How to Break Free From Approval Addiction5 min read 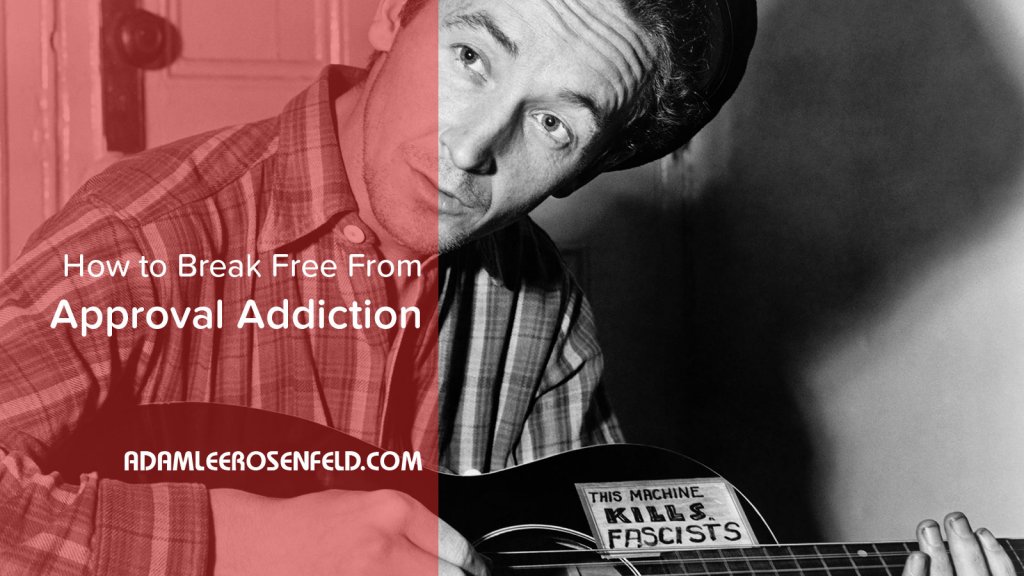 I have a problem. I struggle with the need to be valued by my peers every day. I often find myself looking for that one bit of validation, that “like” on Facebook, that comment on my blog, so I can keep on going. I struggle with approval addiction. Do you?

There’s nothing wrong with approval. But, just like money, it’s a great servant and a terrible master. Approval is a helpful indicator as to where the value is in your life. Where the gold is, so you can keep digging. And approval is something that works best when shared with others.

The truth is, I’m already valuable. I don’t need to be validated by other people. And if I don’t understand that fundamental truth – then no approval from any peer, no matter how esteemed, will ever be enough for me.

A History of Approval Addiction

In 2005, I released my first full-length album. I tried to do everything right. I sent out promo copies, reached out to influencers, built a website, covered the city in posters, had a release party, and played as many shows as I could. And in regards to approval, it worked. One music reviewer wrote that it was one of the top 10 albums of the year, one said that I had written the song of the year.

Boom. Validated. This stuff carried me through the next year, as I worked only on my record label and distribution. But soon enough I crashed. I was deep in debt, renting two office spaces. I struggled with depression and was barely present emotionally at home. And I wasn’t even making new music. Over time I realized that this pursuit was driven by a need for approval. Approval from record labels, approval from other artists, approval from fans, approval from my peers.

Even after I shut down my record label and distribution and got a “real job,” this behavior continued in my life. It was only until someone older and wiser told me that “my need for validation had been with me longer than I can remember.” Some serious therapeutic science got dropped on me.

Today I can’t afford to have an approval addiction. If I can’t figure out that I’m approved by now, then there’s little real good that I can do for anybody. But how do you get it? How does this simple and profound truth sink in? You start by valuing others. If you approve other people, as often and as intentional as possible, you are reminding yourself of the truth that you are approved.

Life’s most important and urgent question is, ‘What are you doing for others?’ – Martin Luther King

The Enemy of Value

And what’s the enemy of valuing people? Being clever. When we focus on our cleverness, we view people as a means to an end – one more “like,” one more share, one more customer. We think people are there to support and validate us. And that’s a lie.

What begins with cleverness can reach as far as to any atrocity committed against humankind. When we begin to view people as objects, we’ve lost our way.

Your cleverness does not add value to people. It’s your value that does that. Cleverness just makes it more awesome.

You Have 14 Minutes Left

I’ve always found it harsh when it gets said of someone that they’ve “had their 15 minutes of fame.” It’s like saying that someone should be valued only for a brief period of time in their lives – and that’s it. What it really means is, someone did something clever that drew attention for a brief period of time. That person neglected to set up a system where they could provide consistent value to the people interested in them over time.

I’ve seen it many times. Musicians, actors, entrepreneurs who do something awesome, and then expect the world to adore them for the rest of their career. And I’ve done it too. Put out albums, launched businesses, spoke at conferences, etc.

But the whole time the focus was on me. I wanted to cash in for all the hard stuff I’ve been through in life. I felt like people owed me. But guess what? They don’t.

What’s in it for Me?

Humans are constantly being challenged to be good stewards of their resources. And attention is a resource. If there’s isn’t a good return on their attention, they will take it elsewhere. So if you’re just being clever and not adding value to people, you’ve got about 14 minutes left. But more than that, you’re probably not believing the truth that you are valuable. You are already approved. Otherwise you would be spending your time valuing the attention that others give you. Because you know they’re valuable too.

How to Break Free From Approval Addiction

Are you ready to be free of approval addiction? Then go approve someone else.

Look around you, your life, your relationships, look for a quick win in valuing others. Replying to an email, text message or phone call, offering someone a ride, inviting someone out for coffee, or just giving five uninterrupted minutes to your spouse or child.

Doing this will remind you of the truth that you are already approved.

Is there a way you can approve others instead of seeking approval? Let me know in the comments below!

4 thoughts on “How to Break Free From Approval Addiction”