Worst Day Ever? Here are 4 Tips for a Quick Win.6 min read 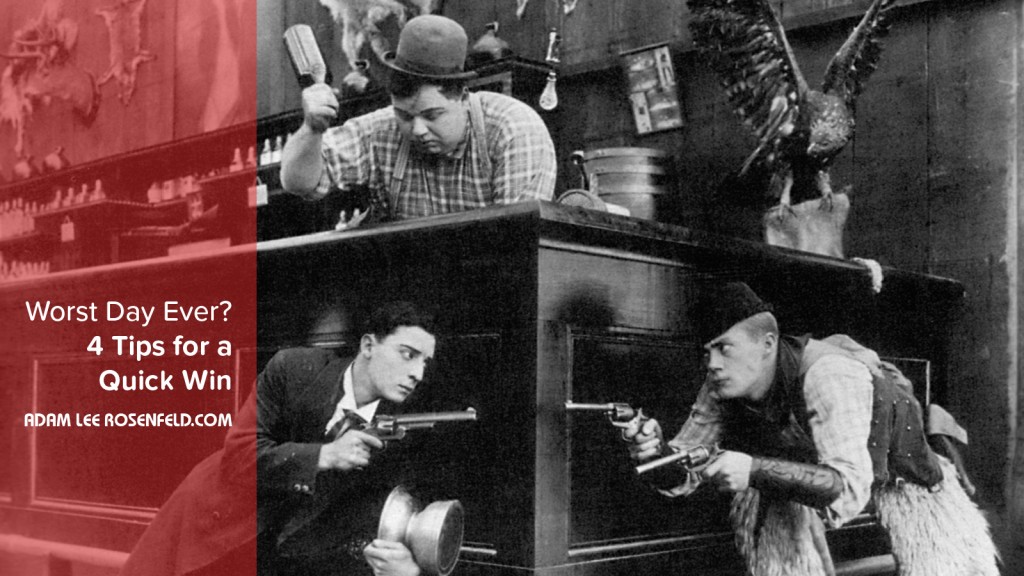 And yeah, that’s a fantasy. My situation was still very real. And such fantasizing is destructive. It’s not good like using your imagination, but rather it’s an attempt to escape from the very place that I need to be right now.

So what happened today that was so bad?

Things could be worse, but…

Sure, things could have been worse, way worse. But what’s important to note is that it felt like the end of the world. If we don’t acknowledge our emotions and handle them properly, we can shut down.

And of course it’s spiritual. But not in the wishy-washy, up to your own interpretation kind of spiritual. It’s an actual battle of principles – a war of values.

Yet, an amazing thing happened during this day of crisis. At the lowest point, when I was about to totally break down from stress, I got clarity. I was able to assess what was standing in the way of me getting things done. I’m familiar with these moments. I keep a pen and notebook handy to jot down quick mind-maps of everything that’s weighing heavy on my conscious mind. Somehow I managed to have a clear thought about three key things that were standing in the way of getting my work done:

That’s it – it’s as simple and as complicated as that. Whew.

You see, although I looked like it, the last thing I needed was to lie down or take a break – that would have made me even more stressed. No, I wanted to get my work done, to move the ball forward.

There’s a time and place for that, the trick is to handle it, and not let it take over – because then you start feeling like a victim. And when does management start taking over? When it encroaches on production. Production is acting on decisions made based on values.

Never, ever give up.

The reason I bring this up is because in the past, I would have just given up on a day like this. Past coping mechanisms in my life had me giving in to self-pity (that led to destructive behavior). Or I would experience an anxiety attack so strong that I would collapse. (Once someone actually called an ambulance on me. That’s not how I want to do life.)

Are you experiencing a day of crisis, a cherry on top of a month of crisis? Are the hordes of Mordor marching all over your to-do list? Does your calendar look like a test site for the hydrogen bomb?

Here’s what to do:

And remember, if all you get done today is the smallest of production tasks like I mentioned in step 3, be content with that. At least you moved the ball forward.

Now it’s time to end the day, let’s see what tomorrow will be like…

* This post originally appeared on January 28th, 2015. It has been updated since.

2 thoughts on “Worst Day Ever? Here are 4 Tips for a Quick Win.”